No Photos On The Dancefloor 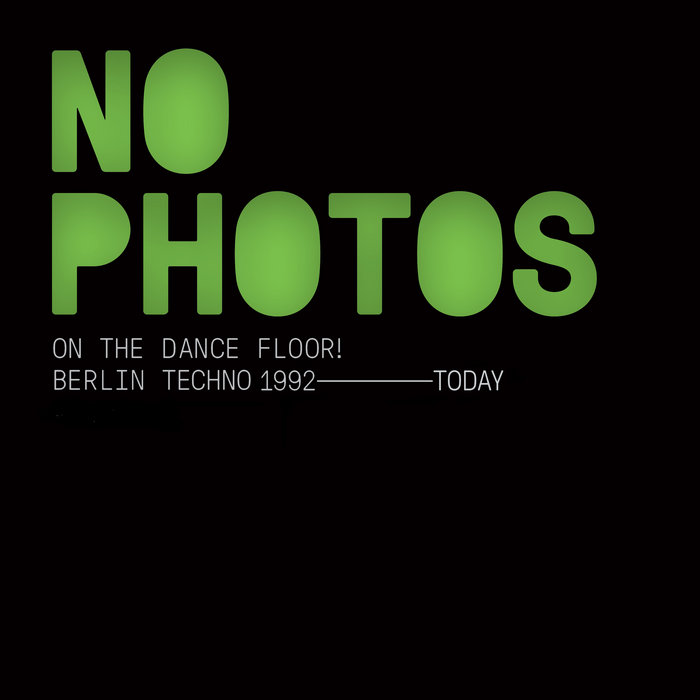 pivic An absolutely wonderful compilation that is lovingly made. I need more volumes. More! MORE!

mdks Black Acid*.👍 but ye .. this album (is) a masterpiece, like ok so one put finger at keyboard re: Black Acid; ..but like evry-track- pretty much nails 'it' IMO😎
*off'beat beginning rides on smth like a sweet-running-combustion engine

'No Photos on the Dance Floor! Berlin Techno 1992–Today', compiled by Heiko Hoffmann, follows a hugely successful photography and video art exhibition by the same name that was co-curated by Hoffmann and shown at C/O Berlin in late 2019. The exhibition included works by photographers and visual artists such as Wolfgang Tillmans, Romual Karmakar, Sven Marquardt and Camille Blake, that dealt with Berlin’s club culture since the fall of the wall. It was followed in 2020 by a book of the same name which collected together the most striking imagery from the exhibition alongside interviews and personal essays.

'No Photos on the Dance Floor!' is the first compilation to trace the history of techno made in Berlin over the last three decades, with a selection of classics and hidden gems that have helped shape Berlin’s sound from the early 90s until now. The title refers to a particularity of the Berlin club scene: photography is banned in almost all the important clubs to allow partying together in a space where you can lose yourself to the music and feel free and safe at the same time.

After the Berlin Wall fell in 1989, abandoned spaces and buildings were waiting to be filled with new life in the form of clubs, bars, galleries, workshops, and studios. Berlin became the epicenter of a new nightlife culture that soon resonated around the world. Berlin’s techno scene was heavily influenced by the pioneering sounds of Detroit techno created by African-American producers such as Juan Atkins, Kevin Saunderson and Underground Resistance.

Their records were imported to the Berlin DJ scene by the record store Hardwax, based on the ground floor of a building on Reichenberger Straße in Kreuzberg, from December 1989 onward. The original temples of DJ culture in New York amd Chicago, as well as the emerging rave culture developing in London and Manchester via Ibiza, would also go on to shape Berlin’s nightlife. Party series like Tekknozid and clubs such as Ufo, Tresor, and Planet can retrospectively be interpreted as the big bang of the first shared culture between Germany's East and West, having paved the way for what is still the last and biggest expression of European youth culture.

Part 2 is drawn from tracks made between 2007 and today, starting at a point when the city became the center for a new creative community of international artists, DJs and producers who often favoured the minimalist aesthetic & musical styles of clubs such as Berghain, Bar25 and Watergate and stayed for the ease of living. Beginning with a remix by Plastikman aka Richie Hawtin of his Minus label signee Heartthrob, the two 12"s also feature contributions from Ben Klock, Avalon Emerson and Modeselektor.

In addition to the two-part vinyl release, 'No Photos on the Dance Floor!' will also be available in expanded CD & digital formats, featuring additional tracks by Rødhad, Efdemin and Ricardo Villalobos.

The record was compiled by Heiko Hoffmann, former editor of Groove magazine and co-curator and co-editor of the 'No Photos on the Dance Floor!' exhibition and accompanying book. The double-vinyl release also features full-format photography by George Nebieridze and Wolfgang Tillmans.